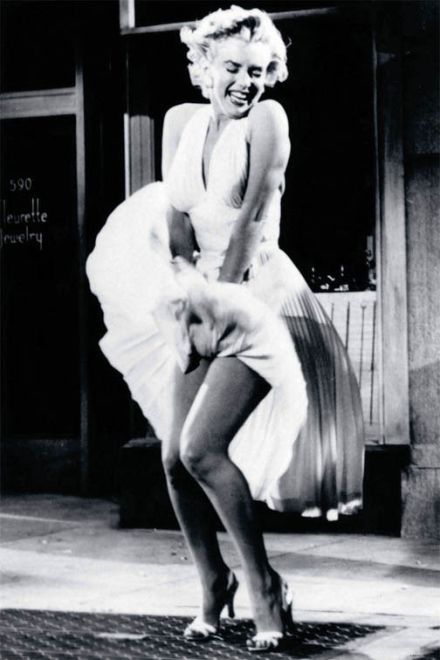 This week marks the 60th anniversary of The Seven Year Itch, Billy Wilder’s film adaptation of George Axelrod’s play about a middle-aged husband—left alone for the summer while his wife and son vacation in Maine—and the girl in the apartment upstairs. In Axelrod’s version, the husband is a fumbling, conflicted adulterer; in Wilder’s version, the husband is a fumbling, conflicted castrato, neutered to appease the Hays Code. Marilyn Monroe is the girl upstairs, and Tom Ewell, reprising his role from the play, is the middle-aged husband. The movie is typical of its era: women are either sex bombs or doting mothers, and men are either jaw-agape dorks or rubber-faced cads. Wilder would later call The Seven Year Itch “a nothing picture” and claim he wish he’d never made it under such moral restrictions. How can a story about adultery not allow for adultery? 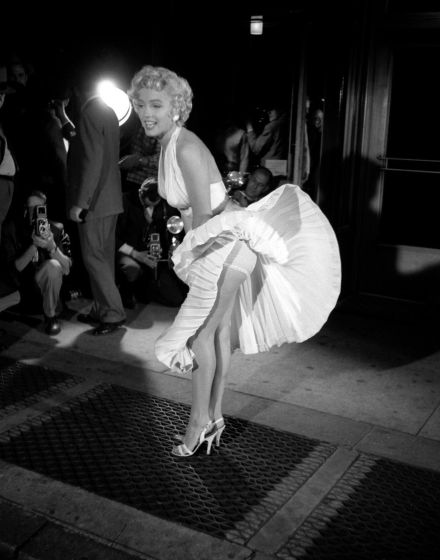 Monroe, that’s how. Among other more obvious gifts, Monroe (who herself would have turned 89 this week) reflected our own pungent longings: a sister-in-sorrow for women in search of mentor and protégé; a perpetual Lolita for men who wanted to read her a bedtime story after a night of savage congress. Monroe’s cheeks begged to be pinched, her waist seemed made for hands to slip around, the way she threw her head back in throaty laughter—followed by those fluttering eyelids and the surprised pout—hinted at that most private of expressions: the orgasm. She promised easy seduction, as though it would only take one drink and a few laughs to make her pearlescent hair fall across our pillow. (Marilyn Monroe Platinum Blond must be a secret formula, like Ferrari Red or Charleston Green. The same can be said of her skin tone, for even when untrammeled by makeup, it retained the hue of a ripe, white peach.)

She first appears in the doorway of Ewell’s brownstone, holding a bag of groceries and an electric fan, its cord trailing like a cat’s tail. Her polka-dotted dress is shrink-wrapped to her body. Her lips are red and wet. She asks Ewell to help untangle her cord, and Ewell—leering, fumbling—obliges. When she finally walks upstairs, in a slow ascent equal parts geisha swish and runway strut, Ewell cannot look away. Neither can we. Monroe’s luminescence is at full wattage here. I imagine a collective gasp coursing through the audience, the censors fanning themselves, NATO calling for air strikes. 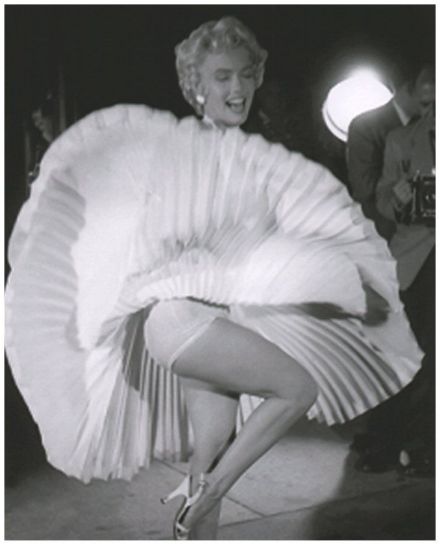 Whenever Monroe leaves the screen, so does our interest. The remaining set pieces—an overbearing boss, some prescient swipes at the health-food craze—are forgettable, save one: besotted, Ewell asks a psychoanalyst for advice.

Husband: I’ve been married for seven years, and I’m afraid I’m coming down with what you and Dr. Steichel call the seven-year itch. What am I going to do?

Doctor: If something itches, my dear sir, the natural tendency is to scratch.

Sexual hysteria—pardon the prudish expression—follows. The husband kisses Monroe, he fantasizes about Monroe, but he does not scratch Monroe. We know how it ends before he does. The sanctity of marriage triumphs, as it must.

Is Monroe’s weapons-grade sexuality enough to save this film? Barely. The iconic status of her subway-grate billowed white dress is the amber in which this movie is preserved, but most of the jokes are corny, the men are irritating, the women are caricatures, and the sex farce isn’t nearly sexual or farcical enough. Still, Monroe abides. She seems like she came from the future. She makes everyone around her obsolete. Monroe walks differently. Shetalks differently. Under her command, that rapid-fire, stage-derived staccato, an audial watermark of 1950s Hollywood, slows to a sensuous, breathy legato. Every color looks good on her; every angle is flattering. The camera cannot remain objective, and neither can we.

Watching with 60 years’ worth of hindsight, it’s clear that The Seven Year Itch is about the sin of boredom, not lust. Left alone, the husband might do something he regrets, but under the supervision of his purring ingénue, he flirts harmlessly, drinks moderately, and makes a charming fool of himself. Monroe treats him the way a beautiful girl might treat the nice boy who lives next door. Her temptation reminds him of what matters most: family, or something like that. She ends their friendship with a three-second kiss, and Ewell flees his brownstone for the safety of Maine. Monroe waves good-bye from the window, smiling, wistful, wholesome, carnal. We don’t want to leave. We want to see her again. We want a girl like Monroe. But some itches are never scratched: in seven years, she would be dead.

life is so short. aoll you can do is the best you are able

I started this portrait of Marilyn a couple weeks back but then my youngest daughter got hit with Pneumonia. I have been so busy caring for her ( not to mention a few day hospital stay in there too) I find I am just so tired every evening I don’t even sit down and pick up a pencil. Every day I say to myself that this is the night I am getting back in the every night drawing habit. Well,its good in theory…maybe tomorrow….sigh 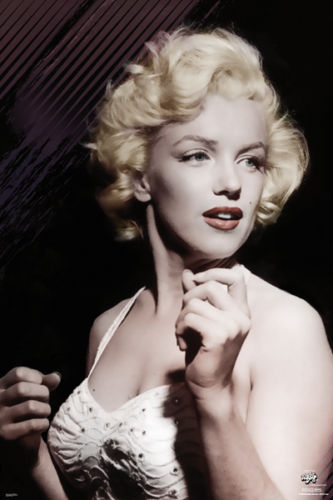 Once upon a time, before she was the ultimate screen sex symbol, before she became an icon and source material for generations of writers and artists, Marilyn Monroe was a working actress.

She died 50 years ago this Sunday at the age of 36 from an overdose and in the intervening years the actual person has disappeared behind the myth of “Marilyn Monroe.” A visit to her place of rest at the Westwood Village Memorial Park offers testimony to the power of her memory. The wall of her crypt had to be replaced multiple times because of fans who made a pilgrimage there to caress, embrace and kiss it. 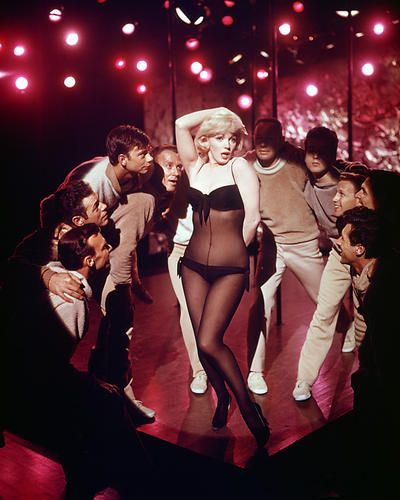 But she was real, and to those who knew her Monroe was a devoted, if troubled, actress who took her craft seriously. In interviews, they remember her as an exceptionally bright and determined woman with a sly sense of humor — a far cry from the sweet but dumb blonds she played in such hits as 1953’s “Gentlemen Prefer Blondes,” 1955’s “The Seven Year Itch” and 1959’s”Some Like It Hot.”She was also someone who could be exasperating to work with — unprofessional with deep insecurities.

In the 1956 drama “Bus Stop,” based on William Inge’s Broadway hit, Monroe played Cherie, a down-on-her-luck chanteuse who dreams of going to “Hollywood and Vine.” Don Murray played Beau, an exuberant, naive cowboy who pursues her.

But Murray recalled that Monroe had a difficult time remembering lines, a problem that would plague her through her career. “The joke was she couldn’t make two sentences meet,” said Murray, who noted that she was often two or three hours late on the set. “That was very strange, that lack of discipline,” said Murray.

INTERACTIVE: Marilyn Monroe’s star on the Walk of Fame

“She was a very experienced film actress, but she could forget so many of the mechanical techniques. She would constantly miss her marks so she would be out of focus or out of the light or in a shadow. I think it was a lack of confidence. For somebody who the camera loved, she was still terrified of going before the camera and broke out in a rash all over her body.”

That combination of ambition, skill and fear turns up in other accounts as well. Actress and dancer Mitzi Gaynor performed with Monroe in the 1954 movie musical “There’s No Business Like Show Business,” along with such seasoned musical comedy veterans as Ethel Merman, Dan Dailey and Donald O’Connor. Monroe was still basking in the glow of her sexy “Diamonds Are a Girl’s Best Friend” number from the film “Gentlemen Prefer Blondes.”

“I never saw anybody work so hard,” noted Gaynor. But it wasn’t an easy ride. “She did such a good job and personally, I think she stole the whole damn show. I just think she was thrown into a nest of vipers.”

The cast had years of experience on the stage. Monroe didn’t. “Ethel would say ‘All right, where’s the blond?’ Marilyn was always late on the set if she had to work with Ethel because I think she scared the you-know-what out of her,” Gaynor said.

But Gaynor had another, eerier memory of Monroe. She recalled that the star’s longtime makeup artist Allan “Whitey” Snyder, made an unusual promise to Monroe.

“Whitey told me many years ago that they had a pact that if she died he would make her up so that the paparazzi would at least see a pretty picture of her when they took her out on the gurney,” Gaynor said.

Even though she was a major star, Monroe continued working on her acting skills. In the mid-1950s she studied acting at the Actors Studio in New York. Oscar winner Martin Landau, who currently runs the Actors Studio West with director Mark Rydell, recalls being in class with Monroe at the studio along with some of the leading actors of the day, including Marlon Brando.

“She was taking Lee Strasberg’s private classes and Tuesday and Friday sessions at the studio,” he said in a recent interview. “She was sitting among people like Geraldine Page, Kim Stanley and Patricia Neal. She was kind of docile, quiet and attentive.”

And remarkably gifted. Landau recalled Monroe’s first scene work in front of the class. “It was with Maureen Stapleton, a scene from ‘Anna Christie.’ It was very well-received.” Landau found something very “genuine about her and very needful at times. She had demons. There were mood swings…”

Her sexuality was as visible off-screen as it was on. Another Oscar winner,Louis Gossett Jr.(“An Officer and a Gentleman”), was also in class with her in New York in the 1950s. Monroe was at the height of her beauty and stardom then, and the 20-year-old Gossett was too intimidated to even sit next to her in class.